We are heavily believers in that you should store your server infrastructure in a Git repository, so we decided to live as we preach! Everything that we install in our Demo environment should be automated with Ansible and versioned by Git. This to:

This is quite cool since we now are describing our whole infrastructure with code and all our code are versioned by git (Infrastructure-as-Code[IaC]). So far all good. We started to collaborate across our Nordic team to created re-usable Ansible roles that we could use in our different automation workflows, but we did not implement a way to automatically and constantly execute and test our Ansible code, which lead to: 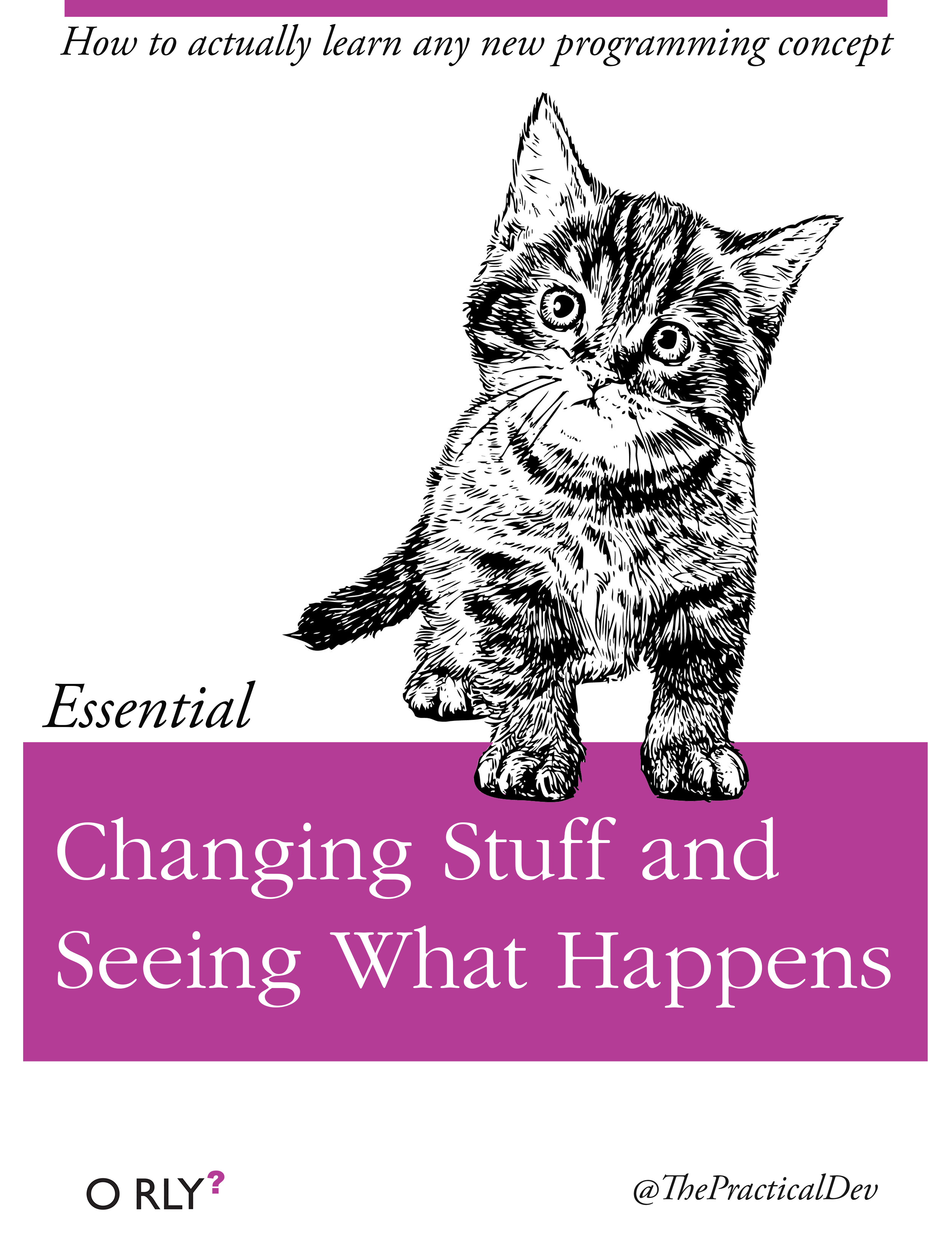 Lesson learned, the glory days of run it, watch it fail, run it again is over. We´re software developers now and must start to threat our code as code, let’s peek over the bulletproof wall to the dev guys & girls in the software development team and see if we can use something they have used for years? Hmm it seems like the Test-driven development[TDD] and Continuous Integration[CI] methodologies would solve our problems, right?. Great, is there any solid Open Source Testing framework for Ansible available ? It sure is, September 26th, 2018 Ansible announced that they will adopt two new projects molecule and ansible-lint, which are great tools that now Red Hat intends to invest resources working with the community to make them even better. kudos to Cisco who transferred the molecule project over to the Red Hat Ansible team. 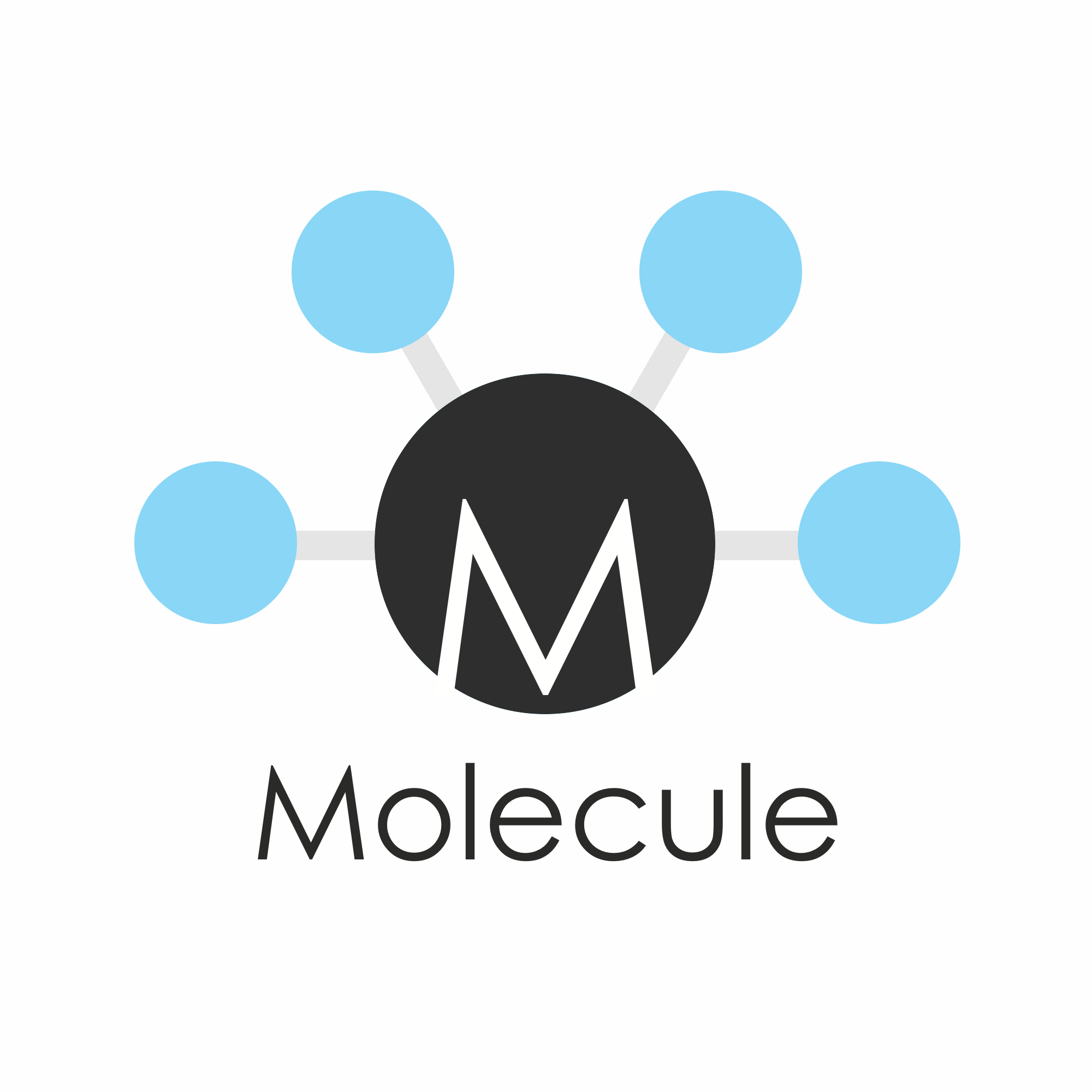 Molecule is the official testing framework for Ansible roles. It provides a streamlined way to create a virtualized environment to test the syntax and functionality of a role. From the Molecule docs:

Molecule encourages an approach that results in consistently developed roles that are well-written, easily understood and maintained.

Testinfra: With Testinfra you can write unit tests in Python to test the actual state of your servers configured by Ansible. This is really great when you are starting to do test-driven development of your roles. Normally when developing an Ansible role/playbook you start writing the Ansible tasks, but now with this you are thinking ahead about tests and starts with writing the unit tests for your Ansible role instead. Time spent here is well invested time, especially if you are part of a big team that maintains many roles.

In this post I will focus on how you can use Molecule to test-driven development of your Ansible roles and in the next post I will add some CI to it.

Preparing your environment for installation

Register your system with the Red Hat Content Delivery Network(You can skip this step if you use centos):

Attach your subscription to the system:

When testing your roles Molecule will spin up one or more instances onto it will execute your role. Molecule uses drivers for this, which let you choose the backend for your platforms. Docker, Vagrant, AWS, Google Cloud, etc. are all drivers. Platforms are the instances created using drivers. Each container or VM is a different platform that your code will be tested on.

To make it simple, Molecule uses Ansible to manage the instances it operates on so basically Molecule support any provider that Ansible supports. In this guide i will use two different providers, Docker (default driver) and Vagrant backed by KVM.

Docker is the default driver for Molecule, It’s lightweight since containers have minimal footprint. And with the wide choice of container images available, you can easily test your Ansible role on different platforms like RHEL, SUSE, ubuntu etc. But since containers are what they are, (a convenient way to package applications) they are not suitable for all use case. They’re no VM no matter how many workarounds and hacks you come up with like systemd in a container, bind-mounting host sockets and volumes, privileged containers and so on. So they definitely have their place but it really depends on the kind of role you’re writing and testing. Generally, things like collecting info from the target platform, talking to APIs, ensuring config files are compliant, etc. are good candidates to be tested using Docker. On the other hand deploying applications, dealing with services, configuring networking, etc. are almost always best to test on VMs.

There’s another challenge with using Docker if the role is meant for the RHEL platform. That is, due to the required entitlements, one can only run RHEL container images on a subscribed RHEL system. This is not a problem for me since I am using RHEL as OS on my development system, but it can be if you are using for example CentOs, Fedora or OSX.

Vagrant is currently the only driver for using local VMs with Molecule in a simple way. Vagrant in turns leverages different providers, like VirtualBox or Libvirt, to actually create the VMs.

pip is the only supported installation method for Molecule so I will use Python Virtual Environments to install molecule and its requirements onto my system, using Python Virtual Environments also makes it possible for me to install several different versions of Ansible onto the same system to test my roles with. Note that Molecule requires at least Ansible version 2.4.

In the world of Python, an virtual environment is a folder (directory) which contains everything that a Python project (application) needs in order to run in an isolated fashion. When it is initiated, it automatically comes with its own Python interpreter - a copy of the one used to create it - alongside its very own pip.

Create/Initialize a Python virtual environment (virtualenv) containing the Python2.7 interpreter. For this purpose I name my virtualenvs after the ansible version I install in them:

Install Molecule, Testinfra, Ansible and the drivers into the virtualenv:

Repeat above steps for all the Ansible versions you want to test your roles with or create them all in one chunk:

To deactivating a virtual environment:

Initializing a new role with Molecule

Below command uses ansible-galaxy behind the scenes to generate a new Ansible role, then it injects a molecule directory in the role, and sets it up to run builds and test runs in a docker container.

The rhnordicssa skeleton provides a standardized starting point for role development and molecule configuration for our team that is made to work with the ansible-galaxy CLI. we chose to create a skeleton for this to make our roles more consistent written across the team and it also saves us a lot of time when start writing a new role. The skeleton comes with two different scenarios configured and ready to use, one using Docker and one using Vagrant(KVM).

- : Instructions on how to install the dependencies for the driver in use.
- : The Molecule settings for the role. what driver to use, what OS to use, how to lint your role, what tests to run, etc.
- : The converge playbook that will run the role. This should be configured with any custom variables and tasks needed for the role to work. Additional post-tasks can also be added for verifications.
- : Some drivers will have a preparation playbook that uses the raw module to install Python.
- : Basic Testinfra test, can be extended. If the you are not going to write any Python tests, the “molecule/

Lets take a closer look at the Molecule configuration for the kvm scenarion :

I’ll walk you through some parts of the configuration, but the full list of configuration options can be found here.

Below tells Molecule to use galaxy to install dependencies for the role, alternate dependency managers to use are gilt and shell:

Below tells Molecule to use the vagrant driver to create two virtual instances in libvirt, one with centos 6 named instance1 and one with centos 7 named instance2. Both instances are configured with 1Gb of ram and one CPU and added to the group rhel. groups is optional, but I am using them a lot when testing multi-tier playbooks:

Below tells Molecule to use Ansible for provisioning the instances on which your role will be tested on and it points out as the converge playbook. Note that I do not store the converge playbook under the directory, because I am using the same playbook for all scenarios and don’t want to maintain several copies of it:

Lets execute a full test using KVM as the target platform, I know we have not created any Ansible code yet, so all test should pass with green color.

Molecule now runs through all the testing steps(stages): 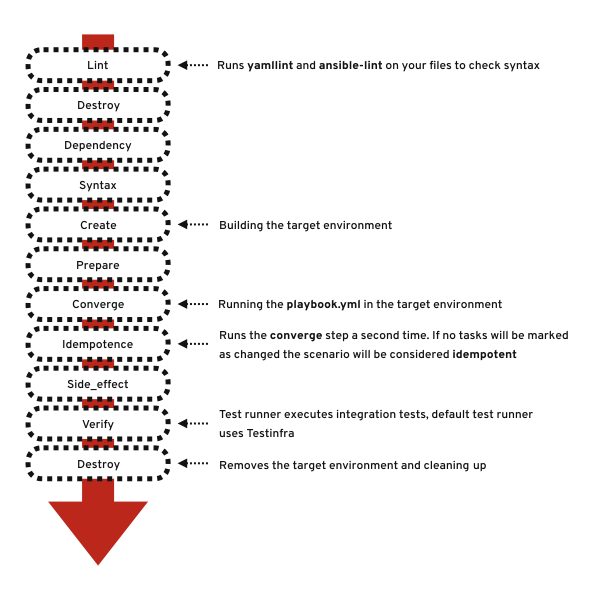 Molecule is great for testing your roles but it is also a great tool while developing you role, instead of executing a full test using you can execute : which will create the virtual environment, run the test playbook.yml and leave the environment running. This is great cause then molecule don’t have to re-create your test environment each time you want to test a new change during the development of the role, it will just run the playbook on the existing environment.

This is usually how the flow looks like for me when writing a new role or modifying an existing role:

You can also login to the virtual environment for troubleshooting:

To get the instance name:

Time to create some code

Normally I would start writing Ansible tasks in now. But since we’re thinking ahead about tests, let’s start creating the Testinfra test instead (otherwise called test-driven development). Since we need a running web server, we’ve got three requirements:

Lets add the following tests to the default Python script that got created for Testinfra while initializing the role :

We’re using three built-in modules, Package, Service and Socket, to check the state of the system after the Ansible role executes. The output from molecule while executing the tests will look like this:

Now we can add our desired tasks and templates to the role to satisfy the requirements:

Time for a final full test :